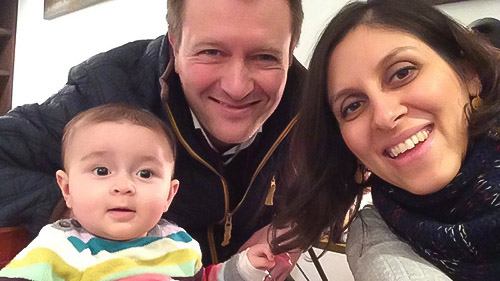 GENEVA – United Nations Special Rapporteur Ahmed Shaheed  today called on the Islamic Republic of Iran for the immediate and unconditional release of a British-Iranian national sentenced to five-years in prison for charges unknown to her, and two elderly dual nationals who are suffering from serious health conditions that require urgent and adequate medical attention.

Nazanin Zaghari-Ratcliffe was arrested on 3 April 2016 along with her 22-month-old daughter. The authorities confiscated their passports, preventing her daughter from traveling back to the UK to be with her father. On 14 August, Ms. Zaghari-Ratcliffe was tried, on secret charges, in a Tehran revolutionary court and, on 6 September, she was convicted and sentenced to five years’ imprisonment. She was only able to meet her lawyer three days before the beginning of her trial. Her health has also seriously deteriorated since her arrest.

“Sentencing individuals for charges that are kept secret from defendants and their defence lawyers is a mockery of justice,” Mr. Shaheed said. “It is also evidence of the Iranian judiciary’s complete disregard for the most basic fair trial and due process guarantees enshrined both in Iranian domestic laws and the International Covenant on Civil and Political rights, to which Iran is a State party.”

“The Iranian authorities should immediately and unconditionally release Ms. Zaghari-Ratcliffe,” the Special Rapporteur urged, noting that the United Nations Working Group on Arbitrary Detention has recently declared the deprivation of liberty of Zaghari-Ratcliffe arbitrary.

The UN human rights experts also expressed concerns about the health of two other dual nationals, Mr. Baquer Namazi and Mr. Kamal Foroughi, who are currently incarcerated in Evin prison.

Mr. Namazi, an 80 year-old Iranian-American has been held in detention since 22 February 2016 on unknown charges and without access to a lawyer. Mr. Foroughi, a 77 year-old British-Iranian businessman is currently serving an eight-year prison sentence on charges of espionage and possession of alcoholic beverages. He was arrested on 5 May 2011.

“Arbitrarily depriving individuals of their liberty and violating their right to fair proceedings before an independent and impartial tribunal are flagrant violations of Iran’s obligations under international law,” Mr. Shaheed stated.

“I am concerned about the ailing health of Mr. Namazi and Mr. Foroughi, which has been complicated as a result of their age,” the expert stressed, underlining the Iranian Government’s obligation to protect prisoners’ right to health and provide them with adequate medical care regardless of their legal status.

The UN expert welcomed the release on 26 September 2016 of Homa Hoodfar, an Iranian-Canadian national who was arrested on 6 June 2016. “I call on the Government of Iran to take all necessary measures to similarly release Ms. Zaghari-Ratcliffe, Mr. Namazi and Mr. Foroughi and allow them to be reunited with their families,” he said.