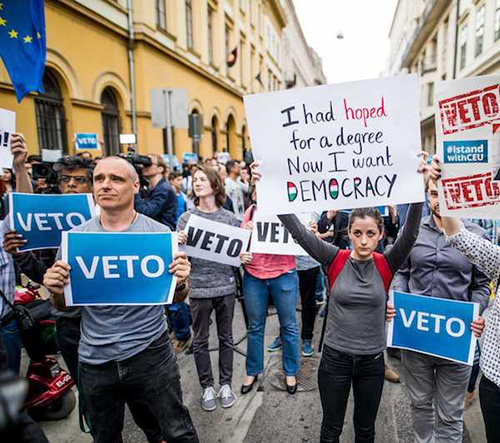 GENEVA – The Parliament of Hungary should reconsider recently adopted legislation which appears to be aimed at undermining the Central European University (CEU) in Budapest, says a United Nations human rights expert.

The bill, adopted on 4 April and signed by President János Áder into law yesterday, “is likely to violate the central precepts of academic freedom in a free society,” warned the UN Special Rapporteur on the freedom of opinion and expression, David Kaye.

“The new law targets freedom of opinion and expression in Hungary, freedom of academic pursuit, the role that scholarship and research play in the expansion of knowledge and the development of democratic societies,” he said.

“Adopted quickly without normal legislative process, the bill seemed designed to damage CEU,” the expert noted. The CEU is accredited in both Hungary and the United States and offers English language postgraduate courses in a range of subjects.

The new law requires, among other things, foreign-accredited universities to provide higher education services in their own country. It also bans universities accredited outside the EU from awarding Hungarian diplomas in the absence of a binding international agreement between the Hungarian government and the national government of the foreign university.

The new legislation also prevents Hungarian-accredited universities that are linked to foreign universities from delivering programmes or issuing degrees from the foreign university with which they are associated. The bill also forbids institutions from having the same or similar names.

“While the new legislation is drafted in seemingly neutral terms, its restrictions would particularly hit CEU,” Mr. Kaye said. “If enacted, its requirements and timelines could cause the University to cease its operations.”

“Members of Parliament have a unique opportunity to restate Hungary’s commitment to democratic norms and academic freedom. I urge them to reconsider this law,” the Special Rapporteur concluded.