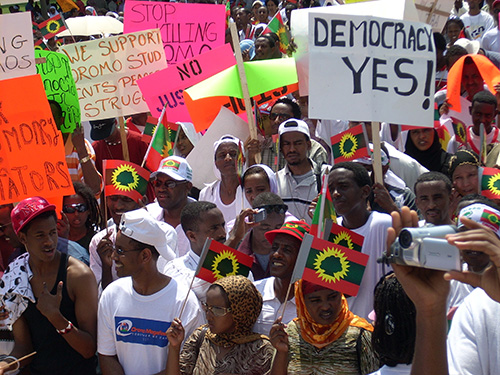 GENEVA – United Nations human rights experts today urged the Ethiopian authorities to end their violent crackdown on peaceful protests, which has reportedly led to the death of over 600 people since November 2015. They further called on the Government to allow an international commission of inquiry to investigate the protests and the violence used against peaceful demonstrators.

“We are outraged at the alarming allegations of mass killings, thousands of injuries, tens of thousands of arrests and hundreds of enforced disappearances,” said the UN Special Rapporteurs on freedom of peaceful assembly and of association, Maina Kiai, the Working Group on enforced or involuntary disappearances and on extrajudicial, summary or arbitrary executions, Agnes Callamard. “We are also extremely concerned by numerous reports that those arrested had faced torture and ill-treatment in military detention centres.”

“In light of the lack of progress in investigating the systematic violence against protesters, we urge the Ethiopian Government to allow an international independent commission to assist in shedding light on these allegations,” they stated.

The human rights experts highlighted in particular the 2 October events in Oromia, where 55 people were killed in a stampede.

“The deaths in the Oromia region last weekend are only the latest in a long string of incidents where the authorities’ use of excessive force has led to mass deaths,” Mr. Kiai said noting that peaceful protests in the Ahmara and Konso Wereda regions have also been met with violence from authorities.

“The scale of this violence and the shocking number of deaths make it clear that this is a calculated campaign to eliminate opposition movements and silence dissenting voices,” he added.

The UN Special Rapporteurs voiced particular concern over the use of national security provisions and counterterrorism legislation – the Anti-Terrorism Proclamation 652/2009 – to target individuals exercising their rights to peaceful assembly.

“This law authorises the use of unrestrained force against suspects and pre-trial detention of up to four months,” Ms. Callamard noted while warning that many of the killings could amount to extrajudicial executions. “Whenever the principles of necessity and proportionality are not respected in the context of crowd control, any death caused by law enforcement officials is considered an extrajudicial execution,” she stressed.

The Working Group on enforced or involuntary disappearances urged the authorities to immediately disclose the whereabouts of those disappeared and emphasized that” all allegations of enforced disappearances must be thoroughly and independently investigated and perpetrators held accountable”.

Ethiopia’s current wave of mass protests began in the Oromia region in November 2015, in response to the Government’s ‘Master Plan’ to expand Addis Ababa’s boundaries, which would lead to the displacement of Oromo farmers. In Konso Wereda, the protests started in mid-December 2015 after the annexation of Konso into the Segen Area Peoples Zone. Protests later spread to other areas of the country, including the Ahmara region.

“Curtailing assembly and association rights is never the answer when there are disagreements in a society; rather, it is a sign of the State’s inability to deal with such disagreements,” Mr Kiai said. “Suffocating dissent only makes things worse, and is likely to lead to further social and political unrest.”

The experts underlined the urgent need to investigate and hold accountable those responsible for the violence. A group of UN experts made a similar call* in January 2016, which went unheeded, they noted.