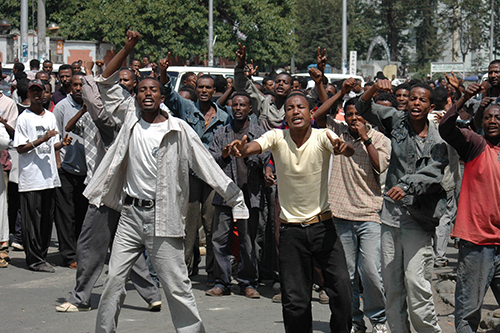 GENEVA – A group of United Nations human rights experts* today urged the Government of Ethiopia to stop misusing anti-terrorism legislation to curb freedoms of expression and association in the country, amid reports that people continue to be detained arbitrarily.

The experts’ call comes on the eve of the consideration by Ethiopia of a series of recommendations made earlier this year by members of the Human Rights Council in a process known as the Universal Periodic Review and which applies equally to all 193 UN Members States. These recommendations are aimed at improving the protection and promotion of human rights in the country, including in the context of counter-terrorism measures.

“Two years after we first raised the alarm, we are still receiving numerous reports on how the anti-terrorism law is being used to target journalists, bloggers, human rights defenders and opposition politicians in Ethiopia,” the experts said. “Torture and inhuman treatment in detention are gross violations of fundamental human rights.”

“Confronting terrorism is important, but it has to be done in adherence to international human rights to be effective,” the independent experts stressed. “Anti-terrorism provisions need to be clearly defined in Ethiopian criminal law, and they must not be abused.”

“We call upon the Government of Ethiopia to free all persons detained arbitrarily under the pretext of countering terrorism,” the experts said.  “Let journalists, human rights defenders, political opponents and religious leaders carry out their legitimate work without fear of intimidation and incarceration.”

The human rights experts reiterated their call on the Ethiopian authorities to respect individuals’ fundamental rights and to apply anti-terrorism legislation cautiously and in accordance with Ethiopia’s international human rights obligations.

“We also urge the Government of Ethiopia to respond positively to the outstanding request to visit by the Special Rapporteurs on freedom of peaceful assembly and association, on torture and other cruel, inhuman or degrading treatment or punishment and on the situation of human rights defenders,” they concluded.