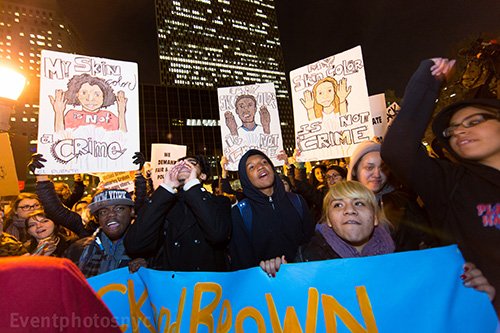 GENEVA – A group of United Nations experts on minority issues, racism, people of African descent, the right to peaceful assembly, and on extrajudicial executions have expressed “legitimate concerns” over the decision not to bring to trial the cases of Michael Brown and Eric Garner in the United States.

The human rights experts voiced deep concern over the broader pattern reflected in this week’s decision of the Staten Island grand jury not to bring to trial the case of Eric Garner, an African-American who died after a police officer put him in a chokehold. They also recalled a similar decision of St. Louis County grand jury in the case of Michael Brown, an African-American teenager shot and killed by a white police officer, in Ferguson, Missouri, last August.

The decisions have sparked a renewed wave of demonstrations across the US against what is considered by many in the African-American community to be unlawful killings and further examples of lethal force being disproportionately used against young African-American men.

The UN experts welcomed possible measures to address consistent allegations of inappropriate policing practices in the country, and to build trust between communities and the police proposed by President Barak Obama. However, they highlighted that “they should also recognize the need for training and to ensure that minorities are recruited into the police in which they are under-represented.”

“I am concerned by the grand juries’ decisions and the apparent conflicting evidence that exists relating to both incidents,” the UN Special Rapporteur on minority issues, Rita Izsák, said.

“A trial process would ensure that all the evidence is considered in detail and that justice can take its proper course,” Ms. Izsák stated. “The decisions leave many with legitimate concerns relating to a pattern of impunity when the victims of excessive use of force come from African-American or other minority communities”.

“There are numerous complaints stating that African Americans are disproportionally affected by such practices of racial profiling and the use of disproportionate and often lethal force”, Mr. Ruteere said. “African-Americans are 10 times more likely to be pulled over by police officers for minor traffic offences than white persons. Such practices must be eradicated.”

“The Michael Brown and Eric Garner’s cases have added to our existing concerns over the longstanding prevalence of racial discrimination faced by African-Americans, particularly in relation to access to justice and discriminatory police practices,” said human rights expert Mireille Fanon Mendes France, who currently heads the UN Working Group of Experts on People of African Descent.

“We call for finalization without undue delay of the on-going investigations into the cases, the delivery of justice and reparations for the victims concerned,” she said. “We urge a comprehensive examination of all laws that could have discriminatory impact on African-Americans to ensure that such laws are in full compliance with the country’s international legal obligations and relevant international standards.”

In the midst of renewed street demonstrations, the UN Special Rapporteur on the rights to freedom of peaceful assembly and of association, Maina Kiai, urged marchers to exercise their right to protest peacefully and without violence.

“We do understand that many people feel angry and frustrated by what they regard as an unjust decision,” the human rights expert said. “However, it is essential to act in accordance to the law and not allow anger to fuel more violence.”

“Similarly, I urge the police to facilitate the right of protestors to demonstrate peacefully and to refrain from the use of excessive force against individuals exercising their freedom to peacefully protest” Mr.Kiai stressed.

The UN Special Rapporteur on extrajudicial, summary or arbitrary executions, Christof Heyns, stressed that international law allows the use of lethal force only where it is absolutely necessary to protect life.

“The laws of many of the States in the US are much more permissive, creating an atmosphere where there are not enough constraints on the use of force. A comprehensive review of the system is needed – the enabling laws, the kinds of weapons the police use, the training they receive, and the use of technology such as on-body cameras to ensure accountability,” Mr. Heyns said.