Egypt: UN experts alarmed at violence and clampdown on fundamental freedoms in run-up to elections 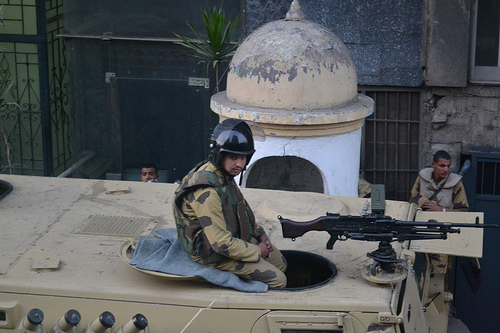 A group of United Nations independent experts today expressed alarm at the degree of violence and deterioration of the freedoms of peaceful assembly and association which have led to loss of life in Egypt, ahead of parliamentary elections planned for 28 November 2011.

“The Egyptian authorities must stop using violence and engage immediately in a genuine national dialogue with all groups of society. An independent investigation should be immediately initiated into the cause of death and escalation of violence.”

For the UN Special Rapporteur on summary executions, Mr. Christof Heyns, “the use of lethal force is not an option when controlling demonstrations, dissent must be tolerated and not restrained with excessive force which can lead to loss of life. I strongly urge the security forces to exercise the utmost restraint to avoid the escalation of violence and take immediate measures to protect the right to life of the demonstrators.”

“The right to freedom of expression is a cornerstone for democracy,” said the UN Special Rapporteur on the promotion and protection of the right to freedom of opinion and expression, Mr. Frank La Rue. “As the Egyptian people call for a new chapter of democratic reforms, it is essential that diverse views and opinions, including criticism of authorities, can be expressed peacefully by all. At its current historic juncture, the interim authorities should encourage plural voices to be heard, including through human rights NGOs and the media, particularly in light of the upcoming parliamentary elections.”

Special Rapporteur Kiai also expressed his concern at the deterioration of the right to freedom of association. “Recent NGO reports suggest that the present Government is resorting more and more to the current emergency law and to provisions contained in Egypt’s Law on Associations and Foundations to restrict their activities. This is particularly the case for NGOs that seek foreign funding.”

The UN rights experts recalled that the Government of Egypt pledged in March 2010, during the periodic review of the human rights situation in the country, to introduce a set of legislative reforms that would facilitate the exercise of the rights to freedom of peaceful assembly and of association. The events of recent days do not demonstrate this commitment.

“We call on the Government of Egypt to meet its international obligations regarding the rights to freedom of peaceful assembly and association and not to suppress by any means, particularly not by force, public voices and gatherings. The Government must show its full support to a political transition that guarantees the respect of democratic principles”, they added.

The experts also echoed the appeal by the Office of the UN High Commissioner for Human Rights on 11 November, for the country to fully guarantee the freedom of expression, peaceful assembly and association “which are particularly crucial to ensure the free and fair conduct of the upcoming elections.”