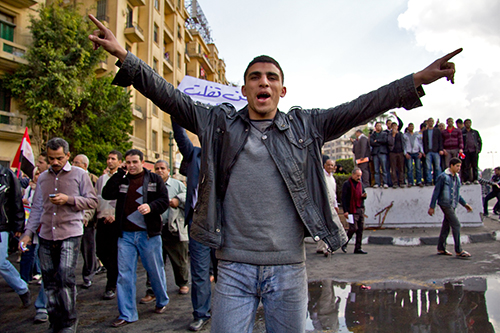 GENEVA – United Nations expert Maina Kiai has expressed serious alarm at Egypt’s approval of a draft law which would impose major restrictions on the work of non-governmental organizations (NGOs).

Mr. Kiai said that if the bill became law, it would devastate the country’s civil society for generations to come and turn it into a government puppet.

The Egyptian Parliament approved the bill on 15 November and sent it to the State Council for review; it will be sent back to the Parliament for a final vote at an unknown date. The government did not hold consultations with civil society on its contents.

Mr. Kiai, Special Rapporteur on the rights to freedom of peaceful assembly and of association, said the law appeared to be “deliberately drafted to curtail civil society’s ability to operate, and to stifle their ability to freely express themselves”.

The bill’s provisions violated international law and contradicted Egypt’s own constitution, he said.

“This bill proposes perhaps the worst restrictions on fundamental freedoms in Egypt since the 2011 uprisings,” Mr. Kiai said. “It aims to destroy Egypt’s foundation for peaceful, civic engagement at its very roots. If it becomes law, it would devastate civil society not only in the short term, but possibly for generations to come”.

“I urge Egyptian authorities to immediately halt the adoption of this bill.”

The Special Rapporteur highlighted a litany of serious flaws in the proposed law. One of the gravest, he said, was that the government would wield excessive power and discretion in deciding who could establish an association and for what purpose.

The bill would introduce a wide range of restrictions on activities, obliging associations to “achieve social development goals within the scope of state plans and development needs and priorities”.

Domestic and international associations would also be forbidden from engaging in “political activities” or anything that harmed “national security or public order or public morals or public health”. Public surveys, research and reports would have to be reviewed and approved by authorities before publication.

The UN expert said that these provisions would effectively make civil society a branch of the government.

“One of the most valuable aspects of civil society is its independence, which puts it in a position to hold government accountable, to propose alternative ideas, and to help develop society in general,” Mr. Kiai stressed. “Civil society can’t perform this function when the law reduces it to the role of the government’s spokesperson.”

The bill also provides a number of broad grounds for organizations to be dissolved by court order, including the receipt of foreign funding without appropriate approval and “collaborating” with a foreign organization without obtaining government permission.

In addition, the draft law would impose criminal penalties, including prison terms, for people found guilty of violating the act, and would allow excessive government interference in numerous aspects of the international affairs of associations. Foreign organizations would be able to operate only with prior government permission, which could be revoked for any violation of the law.

“Egyptian society stands at a critical fork in the road,” Mr. Kiai said. “The country needs only to look to its neighbours to see the possible consequences of choosing the path where people are excluded and there is no space for peaceful dissent.

“I urge the government to choose a different path by rejecting this bill, and moving instead towards a stable and prosperous future built on inclusion, engagement and participation.”