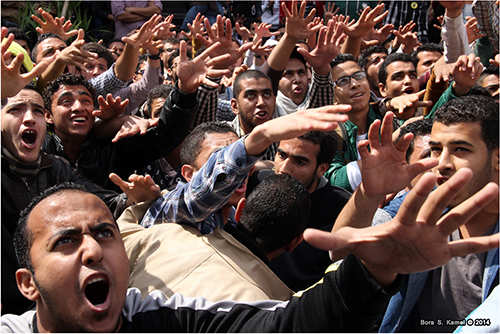 GENEVA – A group of United Nations human rights experts, including Special Rapporteur Maina Kiai, expressed outrage at the decision by an Egyptian court to uphold the death sentences against 183 people, and called on Egypt to respect  its obligations under international human rights law.

“By imposing mass death sentences on several occasions over the past two years, the Egyptian courts have shown their utter disregard for the right to life as protected under international law,” the experts said. Most of the defendants in this third mass sentencing since January 2014 are alleged supporters of deposed President Mohammed Morsi.

“We previously warned the authorities that with the imposition of mass death sentences, Egyptian courts were casting a serious shadow over the independence and impartiality of the country’s justice system.”

The experts’ statement follows last Monday’s decision by an Egyptian court to uphold a previous verdict sentencing 183 people to death for allegedly carrying out an attack on a police station in the village of Kerdassa on the outskirts of Cairo in August 2013, in which 13 policemen were killed.

“These latest developments show Egypt’s persistent failure to comply with its international human rights law obligations, in particular relating to due process and fair trial guarantees,” the independent experts added.

The assertion that the judiciary is independent and subject to no authority other than the law, cannot be an argument to justify inaction of the Egyptian authorities.  “As one of the three branches of the State, the judiciary must abide by the country’s international human rights obligations”, the experts highlighted,

The human rights experts recalled that, according to international human rights law, the death penalty may only be imposed and executed following a trial that complied with the most stringent due process and fair trial guarantees, including in terrorism-related cases.

“If due process and fair trial guarantees are not ensured, the death penalty would amount to a summary execution, which is strictly prohibited under international law,” they underscored.

“We reiterate our call to the Egyptian authorities and the judiciary to urgently address our concerns, reconsider death penalty cases in accordance with their international human rights law obligations, and take all necessary measures to ensure that due process and fair trial violations are not repeated in the future,” they concluded.