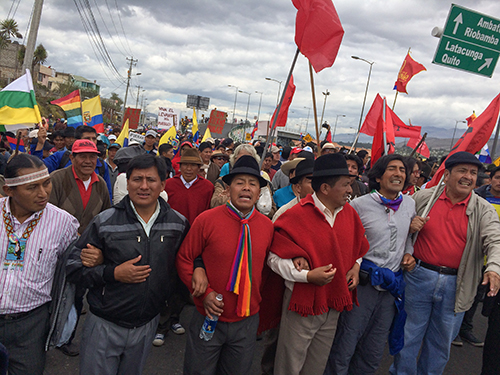 GENEVA – A group of United Nations human rights experts today condemned the use of the domestic legislation in Ecuador to dissolve the National Union of Teachers (UNE), the largest teachers trade union in the country. The UNE, founded in 1950, was dissolved through the application of Executive Decree N. 739, which regulates the operation of social organizations.

“Executive Decree N. 739 establishes overly broad restrictions to freedom of expression and freedom of association, and allows State authorities to dissolve associations based on ambiguous criteria,” the experts noted. “We are deeply concerned that this legislation indeed provides the executive with discretionary power to suppress the voice of civil society in the country.”

The experts stressed that all people should enjoy the right to freedom of association recognized by international law and enshrined in the International Covenant on Civil and Political Rights, which Ecuador ratified in March 1969.

“With the effective dissolution of the UNE, the most important association of teachers in the country, we are concerned that teachers are deprived of a major tool to raise their voice and concerns, and it might have a chilling effect on civil society and human rights defenders in general” said Michel Forst, UN Special rapporteur on the situation of human rights defenders.

“Teachers are a vital part of the educational system. Depriving teachers of one of the main channels for expressing their collective concerns is not only detrimental to their freedom of expression, but equally to Ecuador’s system of education”, added David Kaye, UN Special rapporteur on the protection and promotion of the right to freedom of opinion and expression.

“The forced dissolution of an association is one of the severest types of restrictions to freedom of association, which can only be justified in the most exceptional cases. It must be prescribed by law, under strict compliance with the principle of legality, be proportional and necessary in a democratic society” Mr. Kiai stressed.

The UN experts warned that, given the recent activities undertaken by the union, the dissolution is likely to be related to their human rights work. “In fact, it seems that the decision is arbitrary, political and lacks any logical connection to a legitimate State interest,” they noted.

The dissolution takes place in the context of an increasingly restricted space for associations, media and human rights defenders in Ecuador, stressed the experts.

“We urge the Ecuadorian authorities to reverse the dissolution process of UNE and to ensure the enjoyment of the rights to freedom of expression and of association in the country”, they said. “Ecuador needs to align its legislation with the best practices emanating from international human rights norms and standards.”

The experts have already raised their concerns to the Government and asked for further clarifications on the case. They also expressed their willingness to provide technical assistance to the authorities in this matter.

The legal death of a teachers union

On 21 July 2016, the Ecuadorian Ministry of Education sent a letter to the UNE notifying it that a process of dissolution had been initiated based on Article 24 of Decree N. 739 (Regulations for the Operation of the Unified Information System of Social Organizations) together with grounds for dissolution 7, of Article 22: “Failure to comply with obligations mandated by the Constitution, the law and this Regulation, or for incurring in the prohibitions set forth herein”.

On 9 August 2016, the UNE requested that the decision be declared null and void, alleging that it was unconstitutional, failed to guarantee due process, deprived them of the right to defense, and illegally allocated the burden of proof on the organization. The Ministry of Education notified UNE on 18 August 2016 that the organization had failed to comply with its own statute and with Article 22, no. 7 of Decree N. 739. The effective implementation of the process of dissolution of the UNE began on August 26.