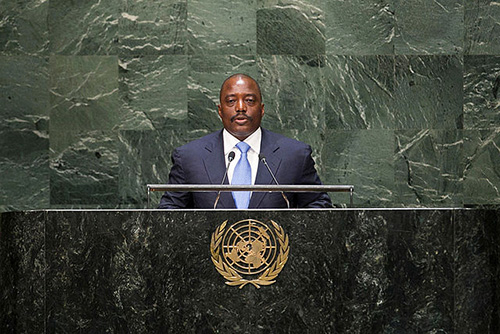 GENEVA – United Nations experts, including Maina Kiai, are calling on the authorities in the Democratic Republic of the Congo (DRC) to lift political restrictions which they say are curbing people’s rights to freedom of expression, peaceful assembly and association.

These restrictions, which include a de facto ban on all public political rallies and meetings in the country’s main cities, were introduced over the past year and were reiterated with an announcement issued on 1 December banning organizations not registered.

“These measures have most recently affected the citizens’ movements LUCHA and Filimbi, both young citizen movements aiming at promoting political participation, which recently launched a public awareness campaign calling for respect for the Constitution,” said the UN experts.

“These measures are in violation of international human rights conventions to which the government in Kinshasa is a signatory, and breaches the UN Declaration on Human Rights Defenders,” they stressed.

The DRC has recently known a wave of protests from demonstrators concerned that President Joseph Kabila will refuse to step down from office today – 19 December – when his second and final term under the current constitutional arrangements is due to end. Elections to replace him have been delayed until 2018.

The Special Rapporteurs highlighted that, on 1 December, five LUCHA members and one journalist were arrested in Ituri province while they were preparing a press conference to launch the campaign. The journalist was later released, but the other five people are still in detention facing jail for alleged incitement of misconduct toward the authorities.

“The targeted repression of dissenting voices of civil society and human rights defenders is contrary to democratic principles,” the experts noted. “If civil society is not allowed to exercise the rights of freedom of expression, freedom of association and peaceful assembly, protesters will inevitably resort to violence, for which only the authorities are to be blamed.”

The UN experts said they deplore the double standards applied by the authorities in Kinshasa, allowing pro-government youths to conduct public activities while repressing dissenting voices.

“We urge the authorities to immediately cease the targeted repression against civil society and to uphold the human rights commitments ratified by the DRC,” they added. “It is the responsibility of the authorities to guarantee conditions so that fundamental rights and freedoms can be exercised peacefully rather than to repress them.”

To reports that the government has ordered Internet service providers to block access to social media websites ahead of expected protests against President Kabila, the experts stressed that “a measure of this broad scale suppresses the right of the people of DRC to access information and to communicate. This right is particularly essential during times of public debate and democratic choice.”

UN Special Rapporteurs have previously raised concerns that the DRC government was silencing its critics in clear violation of human rights law, and have called for the restoration of all political freedoms to the people.