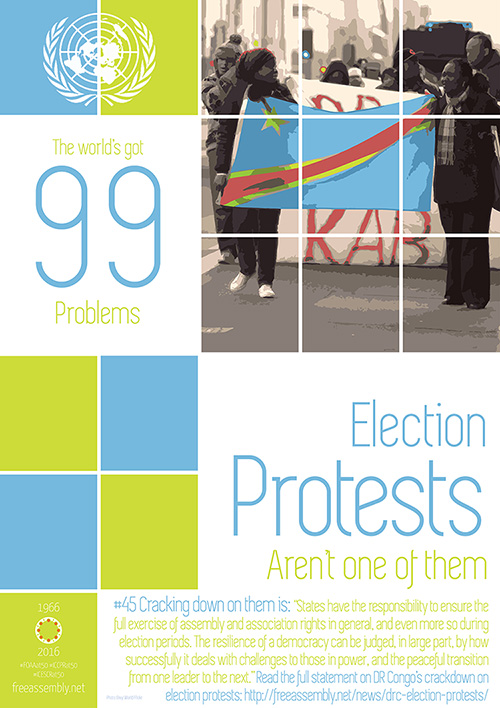 GENEVA – Two United Nations human rights experts today urged the Government of the Democratic Republic of the Congo (DRC) to put an immediate end to the disproportionate use of force against the exercise of the freedoms of peaceful assembly and expression in the country.

According to information received, more than 80 people have been reportedly killed, hundreds injured, thousands arrested and at least 225 demonstrations have been squashed or banned since protests began in January 2015 against proposed reforms to the electoral law that could allow current President Joseph Kabila to stay in office beyond the constitutional limit of two terms. Details are still being verified and other sources report much higher figures.

Human rights defenders, journalists and opposition leaders have reportedly been particularly targeted by the Congolese National Police, the National Intelligence Agency, the Republican Guard and the armed forces.

“People’s demand for a legal and peaceful political transition should not be met with excessive force and paid in blood. They ought to be celebrated and respected,” noted the new UN Special Rapporteur on summary executions, Agnes Callamard. “Indiscriminate firing into a crowd is unlawful. Firearms and other potentially lethal weapons should never be used simply to disperse a demonstration,” she added.

“Demonstrations should ordinarily be managed with no resort to force, unless in exceptional circumstances of imminent threat of death or serious injury, and even in such cases force shall always be subject to the requirements of necessity and proportionality,” she said.

President Kabila’s final term in office is due to expire in December and elections are due in late November, but the National Electoral Commission has said that it will not be possible to hold them then.

“We urge the Government to immediately halt the violent repression of protests and to release protestors who have been arrested for exercising their legitimate rights to freedom of expression and peaceful assembly,” Mr. Kiai said.

Ms. Callamard expressed alarm at the number of persons reportedly injured and killed during the demonstrations and recalled the State’s duty to investigate promptly and effectively all suspected violations and bring perpetrators to justice. “Allegations of excessive use of force, bodily harm and unlawful killings should not go unpunished,” she said.

The UN Special Rapporteurs also called for an international independent and interdisciplinary investigation to assisting in shedding light on these allegations.

“The renewed violent repression of protests and the increasing crackdown on civil society – including the targeting of key human rights activists – suggest that the Government considers civil society as a threat and is simply engaging in a systematic campaign to silence dissenting voices,” noted Mr. Kiai.

“The rights to freedom of peaceful assembly and of association are essential to the democratic process, both during the election period and between elections,” Special Rapporteur Kiai said, quoting his 2013 report, which concerned the exercise of these rights in the context of election periods.

“States have the responsibility to ensure the full exercise of these rights in general, and even more so during election periods. The resilience of a democracy can be judged, in large part, by how successfully it deals with challenges to those in power, and the peaceful transition from one leader to the next”, the expert underscored.

Mr. Kiai further stressed that electoral periods often increase political tensions, but it is especially around this time that authorities should protect and facilitate fundamental expressive freedoms in order to allow citizens to fully participate in public debate and the decision making process.

“There is clearly a political crisis in the Democratic Republic of the Congo, but a threat to the government does not equal a threat to the State. It is imperative at times such as these that authorities give space to allow individuals to raise their voices to express their views and aspirations,” he added.