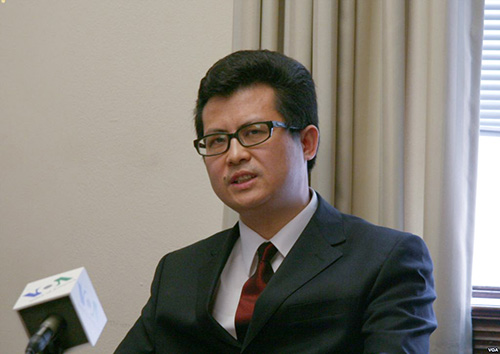 GENEVA – A group of United Nations independent experts, including Maina Kiai, today expressed deep concern about the critical health condition of prominent Chinese human rights defender Yang Maodong, known by his pen-name Guo Feixiong. They called on the Government of China to urgently provide Mr. Guo with specialized medical care, based on his full and informed consent, and stop all forms of ill-treatment.

“We are concerned about repeated incidents of degrading and humiliating treatment suffered by Mr Guo in detention, both at the hands of other inmates and prison guards at Yangchun Prison in Guangdong province,” they said. Mr. Guo has been on a hunger strike for almost three months demanding to be transferred to another prison where he would be free from ill-treatment.

“His public profile as a human rights defender seems to have been the cause and aggravating factor for the denial of appropriate medical care and ill-treatment, which included sleep deprivation, harassment, and humiliating medical procedure filmed by prison officials for public release,” the experts stated.

The human rights defender was arrested in August 2013 for taking part in a public protest against official censorship of a Guangzhou newspaper. In November 2015, he was sentenced to six years of imprisonment on charges of ‘gathering crowds to disturb public order’ and ‘picking quarrels and provoking trouble’.

“Mr. Guo’s six-year imprisonment is connected to his peaceful and legitimate human rights activities,” the experts said. “His only wrong-doing was to have exercised his rights to peaceful assembly and expression concerning censorship in China.”

“The Chinese Government should heed Mr. Guo’s demands and take immediate measures to stop the degrading and humiliating treatment, ensure independent medical care with Mr. Guo’s consent and transfer him to another prison,” they underscored.

The UN experts reiterated that the criminalization of legitimate human rights activities and the exercise of the rights to freedom of expression and of peaceful assembly that has formed the legal basis for the arrest, conviction and detention of Mr. Guo, is incompatible with China’s obligations under international human rights law.

They recalled that in 2015, the UN Committee against Torture recommended the Government of China “to refrain from prosecuting human rights defenders, lawyers, petitioners and others for their legitimate activities for broadly defined offences.” They also noted that, since 2006, UN independent human rights experts have sent eight official communications to the Chinese Government raising various concerns about Mr. Guo’s situation. They also reminded the Government of repeated requests from the Special Rapporteur on the situation of human rights defenders to visit China.

“We urge the Chinese authorities to release Mr. Guo and recognize the important contribution of human rights defenders in upholding constitutional values in China,” the experts concluded.