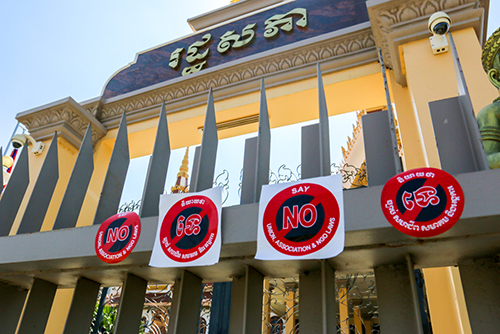 GENEVA – United Nations human rights expert Maina Kiai today called on the Cambodian Senate to reject the draft Law on Associations and Non-Governmental Organisations (LANGO) that “unequivocally threatens the very existence of a free and independent civil society in Cambodia.”

The NGO Bill will soon be examined by the Senate, after being approved on Monday 13 July by the Cambodian National Assembly. The Bill was unanimously adopted by the 68 parliamentarians belonging to the ruling party, while the 55 parliamentarians in the opposition boycotted the vote.

“Should the draft law be adopted, any group advocating for human rights, basic freedoms and good governance may be shut down and criminalized. It will ultimately have a disastrous impact on Cambodian citizens’ democratic participation in furthering the development of their country,” the Special Rapporteur on the rights to freedom of peaceful assembly and of association warned.

“I urge the Senate to reject entirely the Bill as it direly falls short of international human rights norms governing freedom of association, in particular Article 22 of the International Covenant on Civil and Political Rights which Cambodia acceded in 1992,” Mr. Kiai said.

The Special Rapporteur highlighted that, under the draft law, associations and NGOs operating without registration in Cambodia will face criminal liability, among other issues of concern.

The authorities can de-register local and international associations and NGOs if they consider them as not ‘politically neutral’. They can similarly deny registration on the vague grounds that the purpose and goal of the associations or NGOs ‘endanger the security, stability and public order or jeopardize national security, national unity, culture, traditions, and customs of Cambodian national society’.

“Equally troubling is the fact that there was no meaningful and transparent consultation with civil society throughout the drafting process. Despite repeated requests from a wide range of stakeholders, no draft was publicly released for several months until after the text was already approved by the Council of Ministers and submitted to the National Assembly. The half-day ‘National Workshop on Understanding Draft LANGO’, convened by the National Assembly on 8 July 2015, did not allow for meaningful substantive exchanges on the detailed content of the draft”, Mr. Kiai underscored.

“Transparency and accountability are the bedrock of any legislative process in a democratic society,” the human rights expert stressed.

“More than ever, I reiterate the call made on numerous occasions since the beginning of my mandate in 2011 to provide technical support and assistance to the Government and legislators of Cambodia with a view to ensuring that the draft law complies with international human rights law,” the Special Rapporteur noted. “It is not too late to reverse the course of action.”