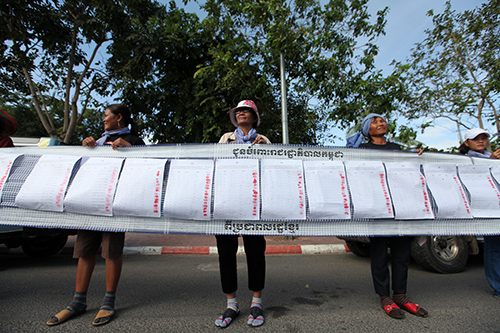 GENEVA – United Nations human rights expert Maina Kiai today reiterated his call to the Government of Cambodia to ensure that civil society can meaningfully contribute to the elaboration of the draft Law on Associations and Non-Governmental Organizations (LANGO), which is expected to be adopted by parliament this month.

“It is ironic that the drafting of a law regulating civil society in Cambodia excludes civil society from the process,” the UN Special Rapporteur on the rights to freedom of peaceful assembly and of association said, stating that he has “serious concerns about a process that would result in the adoption of the LANGO without meaningful public participation.”

Mr. Kiai noted that the development of legislation to regulate civil society associations in the country, which dates back to 2008, has been reportedly shrouded in secrecy.

“Relevant stakeholders have told me that the content of the current draft law has not been disclosed and they have been unsuccessful in their attempts to acquire a copy of text,” he said.

“Sidestepping the democratic process by leaving out civil society actors and their important contribution from the process, and avoiding international scrutiny of legislation, is not without precedent in Cambodia,” he said, noting that important electoral laws and laws on the judiciary were recently adopted either without, or with last minute, disseminations of the texts.

“Transparency and accountability are essential elements of any legislative process in a democratic society,” the UN Special Rapporteur underscored.

The expert recalled that the right to take part in the conduct of public affairs is enshrined in Article 25 of the International Covenant on Civil and Political Rights. The right to freedom of association, protected by article 22, is an essential adjunct to that entitlement as it is often a gateway to such participation.

“Since the Government of Cambodia intends to regulate the framework governing associations, the beneficiaries of the law should be key partners of the drafting process,” he stressed. “Such legislation should be adopted only through a comprehensive participatory process that is inclusive enough to ensure that that all stakeholders are committed to its substance.”

“Government ministries need to formally establish a process by which to publicly circulate draft laws, before their submission to the Council of Ministers, to allow stakeholders to participate in a timely manner when laws are drafted, and not as an afterthought,” Mr. Kiai said.

The Special Rapporteur pointed out that he had written to the Government of Cambodia about problematic provisions in a 2011 version of the draft law on associations, including vague or ambiguous definitions, bureaucratic registration processes, unrealistic membership requirements and additional burdensome requirements on foreign NGOs.

“Since I have not yet received a response from the Government or a copy of the current draft law, it is difficult to assess whether the earlier concerns regarding the draft LANGO have been taken into consideration” he said, “I therefore urge the Government to disclose the text and allow for public consultation.”

Given the importance and urgency of the issue at hand, Mr. Kiai noted that he remained at the disposal of the Cambodian Government for any expert advice it may deem useful to promote and protect the rights to freedom of association and of peaceful assembly.