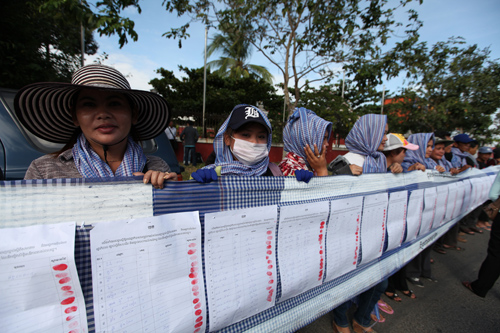 The United Nations Special Rapporteur on the rights to freedom of peaceful assembly and of association, Mr. Maina Kiai, warned that the current public draft of the Law on Associations and Non-Governmental Organizations in Cambodia – if adopted – risks breaching the International Covenant on Civil and Political Rights.

“The current draft NGO Law contains a set of problematic provisions, raising concerns over a potential negative impact on Cambodian citizens’ democratic participation in furthering the development of their country,” warned the UN rights expert. Welcoming a recent statement by the Ambassador of Cambodia to the UN Human Rights Council promising “further consultations,” he called on the authorities to review the draft law in open and meaningful discussions with associations and NGOs.

Mr. Kiai stressed that the draft law makes registration of associations and NGOs mandatory, not voluntary, and prohibits any activity by unregistered groups. “This constitutes a clear infringement of the right to freedom of association. Having a recognized legal status may confer rights and benefits to organizations such as the ability to open bank accounts, but legal status is not necessary for the enjoyment of the right to freedom of association.”

“The draft law excludes refugees, stateless persons and other non-Cambodian residents in Cambodia from forming associations or domestic NGOs by limiting eligible founding members to Cambodian nationals,” the Special Rapporteur said. “This nationality requirement further violates freedom of association, which should be enjoyed by all individuals within Cambodia’s territory.”

Other concerns include the high minimum membership requirement for organizations and associations; the lack of clarity of the draft’s provisions governing criteria for registration, suspension or termination; and the overly cumbersome and bureaucratic registration process for foreign NGOs, which could limit the scope of their activities and hamper their independence.

“A legal framework to ensure freedom of association should facilitate, rather than control, individuals’ enjoyment of this right formally or informally,” Mr. Kiai noted. “It should also emerge from an open, transparent process that engenders goodwill and confidence.”

Likewise, the UN Special Rapporteur on the situation of human rights defenders, Ms. Margaret Sekaggya, said that “given the importance of the role that rights defenders play in democratic societies, the free and full exercise of the right to freedom of association places a duty on States to create a favorable environment for defenders to freely carry out their activities.”

“We urge the Cambodian authorities to fully take on board the legitimate concerns repeatedly raised by NGOs and associations during the announced further consultations, the experts said, acknowledging that the Government has reviewed and revised the draft law numerous times.

“We stand ready to provide technical support and assistance to ensure that the law meets international law standards”, the experts added. In this regard, the UN Special Rapporteur on freedom of association requested an official invitation to Cambodia to discuss how the Government has been making efforts to ensure the rights to freedom of assembly and of association, including this draft law.

The three experts are independent from any Government and serve in their individual capacity.