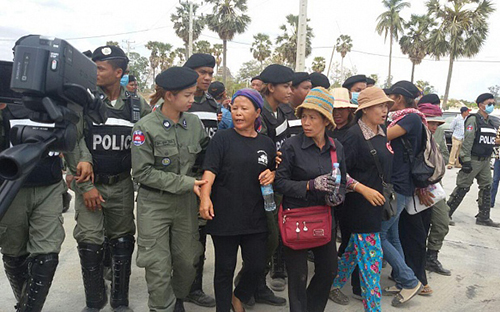 “The escalation of criminal charges, questioning, court proceedings and public statements against them must cease,” the experts said. “We urge the Cambodian authorities to ensure a safe and enabling environment for human rights defenders and civil society, which play a critical role in holding the Government to account and bringing benefits of human rights to the whole of Cambodian society.”

The human rights experts’ appeal comes as the courts investigate an alleged extra-marital affair of an opposition parliamentarian, as well as the related allegations of bribery brought against staff members of a prominent human rights organisation ADHOC. An anti-terrorism department inexplicably initiated these charges, and then anti-corruption unit further pursued the case after ADHOC had provided legal and material support.

“We are also troubled by the actions taken by Cambodian authorities to deter and disperse peaceful demonstrations and arrest individuals protesting what they see as Government’s mounting persecution of civil society and unjustified restrictions of fundamental freedoms in the country,” they stressed.

“Accusatory statements by senior government officials towards the participants of the so-called ‘Black Monday’ campaign and labelling peaceful protesters as ‘rebel groups’ are highly regrettable,” the experts noted. “Such actions are clearly inconsistent with Cambodia’s obligation under international human rights law to respect the rights to freedom of peaceful assembly and association.”

Members of the Cambodian NGO ADHOC have been accused of bribery for providing legal and financial support to a young woman at the centre of the extra-marital affair scandal. The authorities claim that the NGO ‘bribed’ her to deny the affair. The human rights defenders maintain that the support was part of their regular human rights work and given at the individual’s request and for sustenance and transport to government offices for questioning. The NGO workers face five to ten years in prison, if convicted.

“The investigators’ relentless quest for a confession by the young woman, their subsequent outright reliance on it to initiate the other ‘bribery’ cases against defenders, as well as public statements by senior State officials portraying the accused as guilty, generally suggest that this entire episode is nothing more than a politically-motivated persecution of civil society. It also raises serious questions about woefully flawed due process,” the experts said.

With the above cases turned over to the courts, the Cambodian People’s Party has also filed a complaint against an independent commentator for ‘defaming’ the Party, after he had expressed an opinion about the string of the incidents.

“We are deeply alarmed by the subsequent criminal defamation case and public statements by State officials calling for free speech to be curtailed, which are undeniably in breach of the universal right to freedom of expression and opinion,” the UN human rights experts concluded.