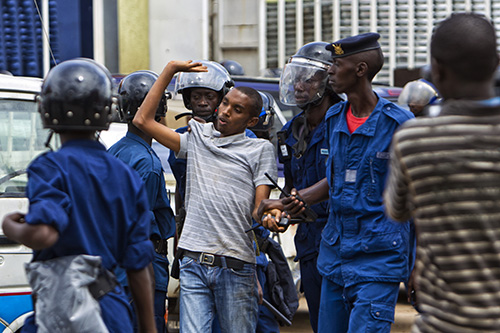 GENEVA – A group of United Nations human rights experts today condemned the recent ban and provisional suspension of a number of civil society organizations in Burundi, and warned about “the obstructive, restrictive and stigmatizing effect of recent legislation on NGOs, in a context of growing repression of human rights defenders.”

On 19 October 2016, the Burundian authorities banned five civil society organizations*. In December 2016, the Ligue ITEKA, one of the leading human rights institutions of the country, which was suspended in October as well as OLUFAD – an NGO promoting good governance and the fight against corruption – have also been barred. Another four organizations** were provisionally suspended.

Following that move, the National Assembly adopted two bills in December 2016 aimed at closely controlling the action of local and international NGOs. This new legislation compels local NGOs to obtain authorization from the Minister of the Interior for any activity and to transfer funds of foreign origin through the Central Bank. The work of foreign NGOs must comply with priorities set by the Government.

“These moves are just the latest in a series of attacks on the rights to freedom of expression and association in Burundi,” the experts, said. “Disturbingly, these measures take particular aim at human rights defenders and independent civil society, and are being used to unduly obstruct and criminalize their work on broad and often fallacious grounds.”

The experts emphasized that the Government’s latest moves against civil society were especially alarming in view of the overall situation for human rights defenders in the country.

“The situation for human rights defenders has been dramatically deteriorating for more than a year and a half,” they noted. “Those who have not yet left the country fear for their life and are under relentless intimidation, threat of arbitrary detention, torture and enforced disappearance.”

“The pattern of systematically targeting human rights organizations and human rights defenders, coupled with the restrictive legal environment, suggests that there is a deliberate will to suppress every dissenting voice in the country,” the Special Rapporteurs cautioned.

The human rights experts drew attention to allegations of a major increase in enforced disappearances with unconfirmed reports of over 60 cases during the last two months of 2016. They cited as an example the case of Marie-Claudette Kwizera, former treasurer of the Ligue ITEKA, who disappeared on 10 December 2015, and whose whereabouts remain unknown. “All reports of enforced disappearances must be thoroughly and independently investigated, and perpetrators brought to justice”, they added.

The Special Rapporteurs further called on the Burundian authorities to revise the new NGO legislation to ensure its compliance with international law and standards to prevent adverse consequences on the important work of hundreds of organizations and human rights defenders.

“It is crucial that the State promotes and protects the rights to freedom of expression and association enshrined in the International Covenant on Civil and Political Rights, to which Burundi is a State party,” they said. “All individuals, including human rights defenders, have the right to express themselves and associate freely, without fear of threats, intimidation, violence, arbitrary detention or enforced or disappearance,” the experts added.

The Special Rapporteurs recalled the unanimously strong stance adopted by various UN bodies, including the UN High Commissioner for Human Rights and the Human Rights Council, which have also expressed serious concerns regarding the abundant evidence of gross human rights violations in Burundi.

“We urge the Government to put an end to the climate of impunity currently prevailing in the country, and to cooperate with the Commission of Inquiry on Burundi and with the Office of the High Commissioner in a positive and collaborative manner, as an essential step towards ending the major crisis facing the country,” the UN independent experts concluded.

This press release is also available in French.