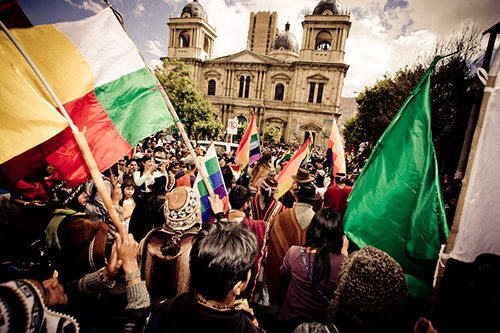 NAIROBI/SUCRE, Bolivia – Special Rapporteur Maina Kiai has filed an amicus curiae brief in the Constitutional Court of Bolivia, arguing that a national law and an executive decree regulating the operations of non-governmental organizations breach the international right to freedom of association.

The brief, which was submitted on May 13, 2015, was the first official court filing in the UN expert’s project to advance the rights to freedom of peaceful assembly and of association through the use of litigation in national and regional courts. The project began in Oct. 2014 and aims to encourage the application of international law norms at the domestic level.

In March 2013, Bolivia adopted the controversial law on legal personality, despite many analyses indicating that it contravened international law. In June 2013, the equally contentious implementing Supreme Decree followed. Late last year, the “Defensor del Pueblo” filed a petition with the Constitutional Court of Bolivia (Tribunal Constitucional Plurinacional de Bolivia), to challenge two specific provisions it deems unconstitutional. In the analysis of the Special Rapporteur these provisions indeed “unjustifiably restrict the right to freedom of association under international law, standards and principles”.

The first challenged provision, Art 7. II. 1 of the Law 351 of 19th of March 2013, stipulates that statutes of NGOs and foundations with activities in more than one department must declare their contribution to “economic and social development.” This information is required when an association requests legal personality or confirmation of legal personality, and the law conditions acquisition or confirmation of legal personality upon the association’s contribution to economic and social development.

The Special Rapporteur argued that the restrictions imposed by this provision “fail to meet the three core conditions in international law for the imposition of restrictions on the right to freedom of association.” Namely, he wrote in the brief, they “are vague and open to broad interpretation”; they failed to pursue a legitimate aim as required by the ICCPR; and they are not necessary in a democratic society.

The second challenged provision, Art 19 (g) of the Supreme Decree 1597 of 5th of June 2013, stipulates that the legal personality of associations can be revoked when associations do not comply with sector policies and/or norms. The Special Rapporteur found that the restrictions imposed by the Supreme Decree are disproportionate, do not meet a legitimate aim and are not clearly proscribed by law as required by international law.

The Special Rapporteur argues that requiring associational behavior to be adjusted to the sector norms and policies – or to how these “norms” are interpreted by public officials – violates associations’ right to freely determine their goals and activities.

“The threat of losing legal personality restricts the right to freedom of association. … It may lead to a situation whereby an association is not, or no longer, able to fulfill the activities it was created for,” Kiai wrote.

The full amicus brief is available to the public both in English and Spanish.

Update July 4, 2016: The Constitutional Court of Bolivia has ruled in the case and found Art 7. II. 1 of  Law 351 and  Art 19 (g) of the Supreme Decree 1597 to be constitutional. The Court did not directly address the arguments made by the Special Rapporteur in his amicus brief.

Media coverage of the decision can be found here, here and here (all stories in Spanish only).

For more on the project, please see our litigation hub page.