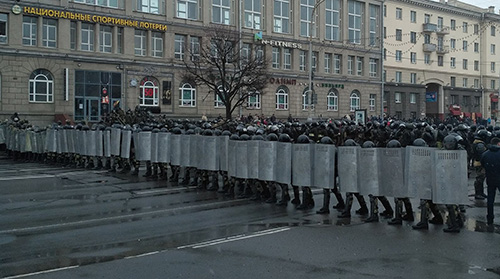 GENEVA – The Special Rapporteur on human rights in Belarus, Miklós Haraszti, has expressed dismay over the Government’s open return to the policy of violent mass repression  against peaceful demonstrators, non-governmental organizations, journalists and political opponents, and is calling on the authorities of Belarus to stop harassment and violence.

His statement was endorsed by Special Rapporteur Maina Kiai and a number of other UN experts.

The crackdown on March 25 and 26 against dozens of human rights defenders, both local and international, came after hundreds of peaceful demonstrators against the Government’s social policies had been violently attacked, arbitrarily arrested and deprived of their liberty, and then summarily fined or sentenced to  prison from one to two weeks. Reports also indicate that the Internet was cut off.

“The events of the last weekend prove the pre-meditated character of the repressive measures, and show an open return by the Government to its old policy of mass repression against citizens who exercise or dispense defense for human rights provided by the constitution and international treaties”, the Rapporteur stressed.

Since early February, demonstrators have been protesting against a decree under which a fine can be levied against anyone who does not work more than 183 days and is not declared officially unemployed.

Mr. Haraszti is “particularly shocked” by the raid against NGOs, such as Viasna, in their own offices, accompanied by physical violence, and by the disappearance for three days, of political opponent Mikalai Statkevich, who was eventually released from the facility of the KGB intelligence service.

“Two weeks ago, I, together with other human rights experts, had warned that further violations could be committed by the Government of President Lukashenko, known for its history of violent oppression of any form of dissenting views.” Mr. Haraszti regrets that his fears materialized.

“I will continue to be vigilant and call on the international community to press for opening to dialogue with human rights defenders and those who promote peaceful and democratic change in Belarus”, Mr. Haraszti concluded.