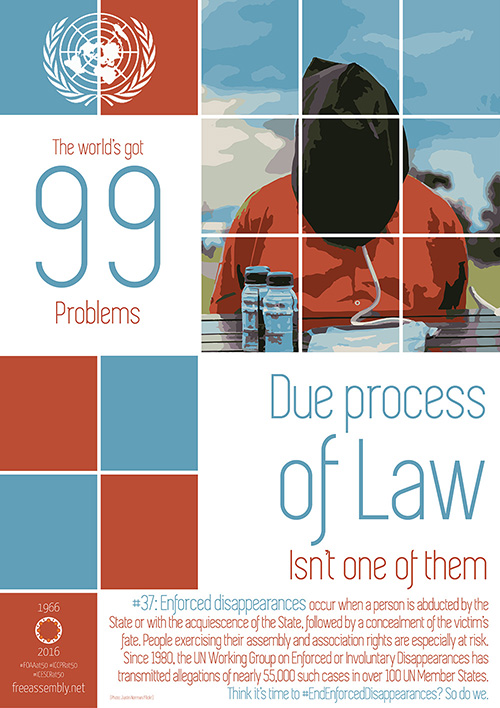 GENEVA – United Nations human rights experts* are calling on Bangladesh to act now to halt an increasing number of enforced disappearances in the country.

The UN Working Group on Enforced or Involuntary Disappearances says the number of cases has risen from a few isolated cases a few years ago, to more than 40 now, and that the number is continuing to grow. Independent reports blame the Rapid Action Battalion of the Bangladesh Police for several disappearances and extra-judicial executions, notably of political opponents of the Government.

“Enforced disappearance is a heinous crime and an offence to human dignity and no circumstances whatsoever may be invoked to justify it,” the Working Group said amid reports that abductions are being frequently used by law enforcement and security agencies.

All three men are linked to opposition political parties. Each of their fathers had been convicted by Bangladesh’s International Crimes Tribunal (ICT), which was set up in 2009 to investigate and prosecute suspects for crimes during the conflict in 1971. They had also worked on their fathers’ defence during the trials and had campaigned subsequently for their release.

The expert panel pointed to widespread criticism of the ICT, including from a number of Special Rapporteurs, and appealed to the Government in Dhaka to take action now, stressing: “All reported cases of enforced disappearances must be thoroughly and independently investigated, and the perpetrators brought to justice.”

The Working Group called on the government of Bangladesh to immediately reveal the whereabouts of the above-mentioned men, and of all other victims of enforced disappearances. The experts also emphasized their willingness to help the Bangladeshi Government to implement the 1992 UN Declaration on the Protection of All Persons From Enforced Disappearance.

* The Working Group on Enforced or Involuntary Disappearances is comprised of five independent experts from all regions of the world. The Chair-Rapporteur is Ms. Houria Es-Slami (Morocco) and the Vice-Chair is Mr. Bernard Duhaime (Canada); other members are Mr. Tae-Ung Baik (Republic of Korea), Mr. Ariel Dulitzky (Argentina) and Mr. Henrikas Mickevicius (Lithuania).