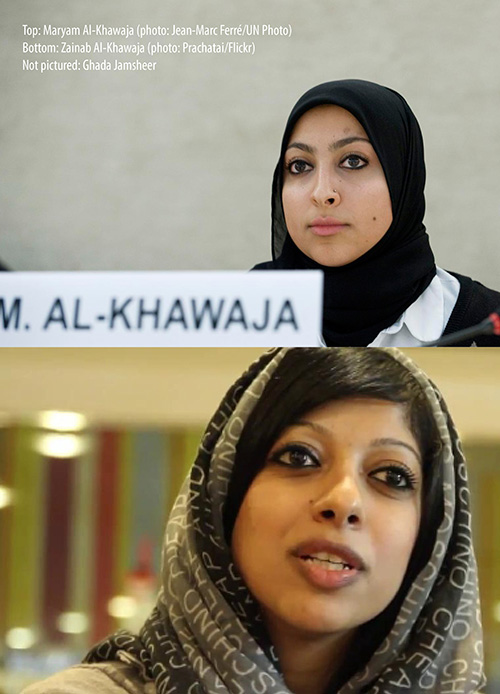 GENEVA – A group of United Nations independent human rights experts, including Maina Kiai, has urged the government of Bahrain to drop charges against three women human rights activists exercising their rights to free expression and free association. “Deprivation of liberty on the sole ground of having exercised the right to free expression may be considered arbitrary,” the experts warned.

Ms. Maryam Al-Khawaja, the co-director of the Gulf Centre for Human Rights, was sentenced on 1 December, in absentia, for allegedly assaulting airport security officers. Her sister, Ms. Zainab Al-Khawaja, a women’s rights and social media activist in Bahrain, was sentenced on 4 December to three years in prison and fined 3,000 BHD (7,900 USD) for tearing a picture of Bahrain’s King during a court hearing in October. Several days later, she was sentenced to an additional year for “insulting a public servant” and is facing further charges for insulting a police officer and trespassing.

The two women activists are daughters of Mr. Abdulhadi al-Khawaja, the former president of the Bahrain Centre for Human Rights, who has been in detention since 2011 and was the subject of numerous calls by UN experts for his release.

Ms. Ghada Jamsheer, head of the Women’s Petition Committee, a network of Bahraini women human rights defenders who campaign for the codification and reform of Bahrain’s family laws, was detained for more than three months since mid-September at Isa Town women’s prison on charges of ‘defamatory tweets’ and for her critical views about corruption in the management of a local hospital. Since 15 December, she has been under house arrest and is currently facing twelve charges, including new charges of ‘assaulting a police officer’ during her detention.

“All three activists have been detained or sentenced purely for their criticism of government authorities,” the independent experts said. “Such criticism is not only fully legitimate according to Bahrain’s obligations under human rights law; it is also essential to the free and public debate necessary for a healthy civil society.

“We are extremely concerned about the ongoing harassment and criminalization of activists in Bahrain,” they added. “We urge the authorities to turn away from such persecution and immediately drop all the charges against the Al-Khawaja sisters and Ms. Jamsheer.”

On a number of occasions the experts have expressed their grave concerns to the Bahraini Government concerning the harassment of these and other human rights defenders, including Nabeel Rajab and Abdulhadi al-Khawaja. They urged the authorities to review Bahraini laws and practices to be compliant with Bahrain’s obligations under human rights law, especially the freedoms of expression and association and the right not to be arbitrarily deprived of liberty.