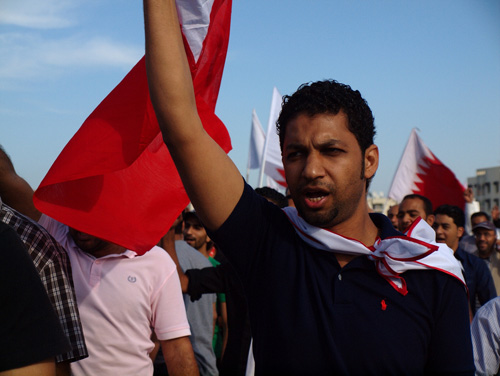 Four United Nations human rights experts on Friday urged the Government of Bahrain to immediately release human rights defender Abdulhadi Al-Khawaja who is serving a life sentence handed down by a military court on terrorism-related charges. The call comes amid serious concerns about the lack of due process and fair trial guarantees.

The National Safety Court, a military court, sentenced Al-Khawaja to life imprisonment on 22 June 2011, after his trial alongside a group of more than 20 human rights defenders. An appeal was rejected by the National Safety Court of Appeal on 28 September 2011. Al-Khawaja’s case is now being reviewed by the Court of Cassation which is due to deliver its verdict on 23 April.

Maina Kiai, the Special Rapporteur on the rights to freedom of assembly and association expressed similar concerns about Mr. Al-Khawaja’s detention being directly linked to his human rights activities in the context of the on-going protests in Bahrain.

“Any restriction to the exercise of the right to freedom of peaceful assembly must be proportional and must be closely reviewed with respect to its necessity and reasonableness,” Mr. Kiai.

“Restrictions on the right to peaceful assembly on the grounds of national security should not be used to suppress the legitimate activities of human rights defenders and activists.”

Gabriela Knaul, Special Rapporteur on the independence of judges and lawyers, expressed grave concern about the trial of Al-Khawaja and other human rights defenders who were collectively tried before a military court despite being civilians. It is alleged that the group was held for a significant period of time in incommunicado detention before being allowed to seek legal counsel. Allegations that the defendants made confessions under duress have reportedly not been investigated and evidence obtained under torture was reportedly not excluded from the trial – in contravention of international law.

“The lack of due process which was alleged during the trials must be addressed by the court where his case is currently under review,” Ms. Knaul stated.

The Special Rapporteur on torture, Juan E. Mendez, added that: “The Government of Bahrain has failed to take necessary measures to ensure the physical and mental integrity of Mr. Al-Khawaja in accordance with the Standard Minimum Rules for the Treatment of Prisoners.”

Mr. Al-Khawaja has been on hunger strike since 8 February 2012. Despite assurances expressed by Bahraini authorities, reports and photos documenting his poor state of health continue to emerge.

“In view of the urgency of the matter, we strongly call on the Government to seriously reconsider the offer by Denmark to transfer Al-Khawaja, a dual citizen of Denmark and Bahrain, on humanitarian grounds, for medical treatment to Denmark,” the experts urged.