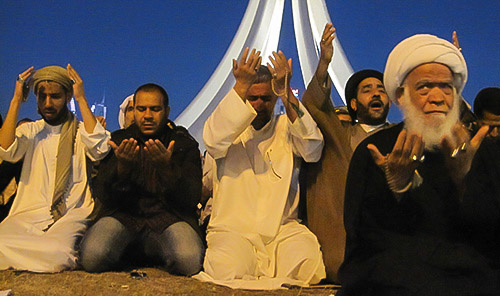 GENEVA – The systematic harassment of the Shia population by the authorities in Bahrain, including stripping many of them of citizenship, is deeply concerning, a group of United Nations human rights independent experts, including Maina Kiai, said today.

“Shias are clearly being targeted on the basis of their religion,” the experts highlighted. “Recently, we witnessed the dissolution of Al-Wefaq National Islamic Society, the shutting of faith-based organizations, restrictions on the practice of religious rites, on Friday prayers and peaceful assemblies, restrictions on movement, restricted access to the Internet and a ban on Shia religious leaders from preaching.”

A wide range of charges are brought against the Shias including ‘illegal gathering’, ‘inciting hatred against the regime’, ‘money laundering’ and ‘acts of terrorism’ in relation to their peaceful gatherings and religious congregations and peaceful expression of their beliefs, views and dissenting opinions, which the experts described as “groundless accusations used to hide a deliberate targeting of Shias in the country.”

“These charges should not be used as a pretext to restrict the freedom of expression, freedom of association and peaceful assembly and freedom of religion or belief,” the UN experts stressed.

“The authorities are also using the Bahrain Citizenship Act or Protection of Society against Acts of Terror law to revoke citizenship. People are being left stateless and are facing deportation from Bahrain,” they said.

The human rights experts expressed concern at allegations that the Government, via an administrative order, had revoked the citizenship of Ayatollah Sheikh Isa Qassim on 20 June 2016, without giving him an opportunity to defend himself. He has also been charged with illegal fundraising and money laundering and his case will be heard in court on 15 September 2016.

“We are also worried to learn that Sheikh Maytham Al-Salman, a human rights defender who has faced a de-facto travel ban since January this year, was brought to the public prosecution yesterday on charges of “illegal gathering” after he was subjected to long hours of interrogation on 14 August 2016 and overnight detention,” the experts noted.

“We are calling on the Government of Bahrain to stop such arbitrary arrests or summons and release all those who have been detained for exercising their rights,” they said. “The authorities should also lift the restrictions on movement including travel bans imposed on different Shia religious leaders and human rights defenders.”

“The Government should not resort to repressive measures and we urge it to enter into dialogue with all relevant parties in order to prevent unnecessary conflict and violence,” the human rights experts concluded.