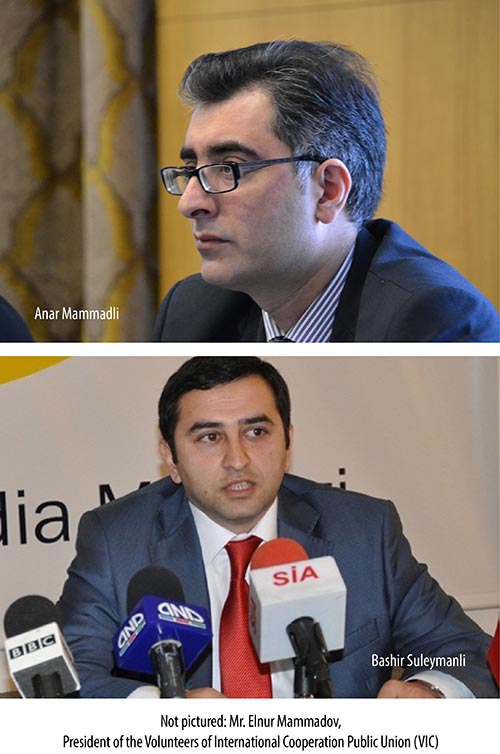 GENEVA – Two United Nations independent experts on Friday expressed serious concern over the charges brought against three human rights defenders in the aftermath of the 2013 presidential elections in Azerbaijan.

Mr. Anar Mammadli and Mr. Bashir Suleymanli, respectively Chairman and Executive Director of the Azerbaijani Election Monitoring and Democracy Studies Centre (EMDSC), together with Mr. Elnur Mammadov, President of the Volunteers of International Cooperation Public Union (VIC), are being tried in Baku for conducting business activity by an organized group without registration and abusing official powers, among other charges. They face up to 12 years’ imprisonment. Mr. Mammadli has been in pre-trial detention since 16 December 2013.

“We are seriously concerned that the three human rights defenders are being prosecuted in retaliation for their legitimate work in documenting alleged widespread irregularities and human rights violations around the presidential elections of 9 October 2013. All charges brought against them should be dropped and Mr. Mammadli should be released immediately,” urged the UN Special Rapporteur on the rights to freedom of peaceful assembly and of association, Maina Kiai.

Mr. Mammadli was one of the participants in the consultation convened by Mr. Kiai in June 2013 in Geneva in preparation of his report on the exercise of the rights to freedom of peaceful assembly and freedom of association in the context of elections. EMDSC has faced many challenges in relation to its registration due to a law establishing excessively bureaucratic procedures.

“Civil society plays a key role in ensuring transparent and fair elections by monitoring the exercise of public freedoms in such critical times. Silencing these human rights defenders would not only have a devastating impact on the Azerbaijani civil society as a whole, it would also indelibly stain the 2013 presidential elections,” added the UN Special Rapporteur on the situation of human rights defenders, Margaret Sekaggya.

The experts recalled their statement of 4 October 2013 in which they urged the Azerbaijani Government to recognize and enable the role of defenders and civil society organizations in the run up to the presidential elections.

“In times of elections, States should make greater efforts to facilitate and protect the exercise of the core right to freedom of association,” the experts reiterated. “This applies as well in post-election periods during which human rights defenders are similarly exposed to violations and abuses,” they added.

The prosecution of the three human rights defenders is all the more troubling as Azerbaijan was elected last month as a member of the United Nations Committee on Non-Governmental Organizations (NGO). This Committee considers applications for consultative status submitted by NGOs, to enable them to access various UN human rights mechanisms. “Should the three men be convicted, it would run contrary to the very spirit of Azerbaijan’s recent election within this UN Committee,” the experts concluded.

Azerbaijan has extended a standing invitation to the independent experts of the Human Rights Council, and Mr. Kiai hopes to be able to visit the country soon.