Letter from the UNSR: Reclaiming our rights in 2016 will require creativity, courage and innovation 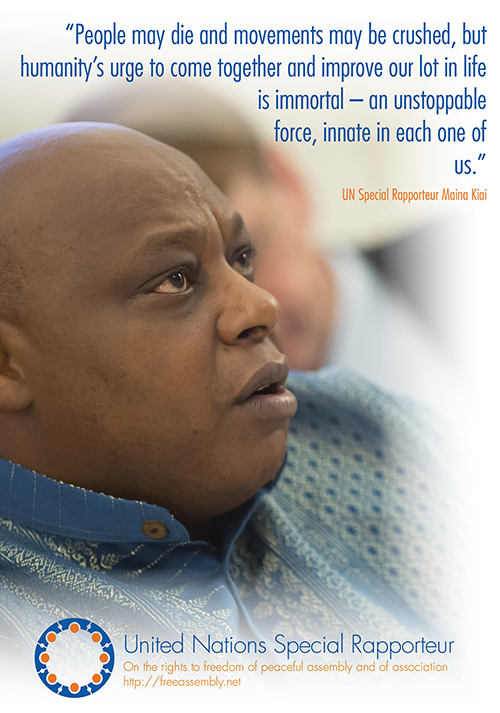 There are any number of words that could be used to describe the events of 2015 – inspiring, uplifting, informative, moving, even maddening.

But there is one word that cannot be used: satisfying.

That is unfortunate, because the year was filled with stirring tales of courage, dedication and passion from activists all over the world: Burundi, the Maldives, Malaysia, Brazil, Bahrain, Venezuela, Russia and more.

Some made lonely stands for justice in the face of daunting odds. Others stood shoulder-to-shoulder to demonstrate with tens of thousands of their compatriots. And in a few cases, some of these individuals even spurred rapid, remarkable change – as was the case in Guatemala, where protests played a key role in forcing the President to resign in the face of corruption allegations.

The problem is that far too many of these stories had the wrong ending in 2015.

One of Burundi’s leading activists, Pierre Claver Mbonimpa, narrowly escaped assassination for standing up for his beliefs; his son and son-in-law were not so lucky. Citizens who took to the street calling for an investigation into a US $700 million corruption case against the Malaysian Prime Minister found some of their numbers arrested; yet no one implicated in the scandal has been charged. In Russia, an opposition activist was gunned down in mysterious circumstances just ahead of a large anti-government protest. And repressive new laws meant to restrict people’s ability to organize were passed – or were close to passing – in Cambodia, Uganda, Kazakhstan, Mauritania, China and Bangladesh, just to name a few.

Against this backdrop, the concept of “shrinking civic space” took its place as one of the defining human rights issues of 2015. It initially seemed an apt descriptor, but as we enter 2016, it already feels outdated.

That’s because we’re well past the point of talking about “shrinking” civic space. In many places, that space is long gone. The challenge for 2016 and beyond is not simply to reverse the trend; we are in a crisis, and we need to re-order our approaches to address this crisis and get that space back.

How? The answer is not yet clear. The traditional tools that we have used to fight for human rights – reporting, documenting, public pressure and recommendations among them – have faltered, perhaps because they stem from another era, when we still had significant space to protect. We are now in new territory, and we need new tools, new approaches, and a radical recalibration of our collective frame of mind.

And that is ultimately why there will be little satisfaction in looking back on 2015.

What I can say is that my mandate took the message of innovation to heart in 2015, rethinking the entire concept of what a UN Special Rapporteur can and should do. You can read about some of our approaches in our annual report: we used litigation to inject international human rights norms into in national and regional courts; we expanded our use of non-traditional communications tools; and we tried to rethink the paradigm of civil society regulation by comparing it to the legal regime governing businesses.

I can also say that I did not achieve any of this alone. This work would not have been possible without the mandate’s many collaborators: my core research and advisory team, the hundreds of activists around the world who have worked with us, and our institutional partners and donors whose support has made our work possible.

One could describe this group as informal association, a living example of exactly why the rights to freedom of peaceful assembly and of association are so important. They bring people together – peacefully and constructively – to solve problems.

And therein lies a possible answer to this riddle of reclaiming civic space. The creativity and innovation we need won’t happen in a vacuum. It is a consequence of collaboration, experimentation and conversation. It is the product, in other words, of the very same fundamental rights that we are fighting for.

And this is ultimately why I am optimistic about our future. People may die and movements may be crushed, but humanity’s urge to come together and improve our lot in life is immortal – an unstoppable force, innate in each one of us. I am looking forward to what this force inspires in 2016, and to seeing each of us do our part in the struggle to reclaim civil society’s rightful space.

This article was adapted from the Special Rapporteur’s annual report, “2015: The Year in Assembly & Association Rights,” which is available here.