This page summarizes cases raised with Bolivia by the Special Rapporteur between May 1, 2011, (when the Special Rapporteur took up his functions) and February 28, 2017 (the date of the last public release of communications). Communications are released to the public once per year. This page also contains observations on these communications and on responses received from Bolivia. Communications and observations are divided into sections based upon which observation report they originally appeared. Each communication is referenced as urgent appeal (UA), allegation letter (AL), joint urgent appeal (JUA) and joint allegation letter (JAL) – the hyperlinks lead to these documents. This is followed by the date the communication was issued, as well as the case number and the State reply (also hyperlinked if available). Summaries and communications are published only in the language of submission (in the case of Bolivia, Spanish). First Report (May 1, 2011 to March 15, 2012) None Second Report (March 16, 2012 to February 28, 2013) None Third Report (March 1, 2013 to February 28, 2014) Joint allegation letter, 27/02/2014. Case no. BOL 2/2014. State reply: Ninguna a la fecha. Presuntos actos intimidatorios, vigilancia y amenazas, incluyendo amenazas de muerte, contra defensores de derechos... Continue reading → 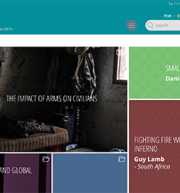 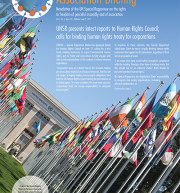 Issue No. 13 of the Assembly and Association Briefing, the newsletter of Maina Kiai, UN Special Rapporteur on the rights to freedom of peaceful assembly and of association. In this issue: • UNSR presents latest reports to Human Rights Council; calls for binding human rights treaty for corporations • Cambodian civil society excluded from NGO bill drafting process, UN rights expert warns • Kiai joins experts to speak out on youth LGBT rights • “Azerbaijani activists must be freed before the Baku 2015 Games” • Bolivia: Special Rapporteur files amicus curiae brief challenging NGO regulations • The Special Rapporteur announces official visit to Chile in September 2015 • Freedom of association and assembly: By the numbers • Special Rapporteur news in brief: May-June 2015 • World briefing: Freedom of assembly and association in the news For a link to the newsletter, click on the image at right or click here (3.6MB file) or here (12.3MB full resolution file). To subscribe to our newsletter, please drop us a line at info@freeassembly.net with the subject line “subscribe to newsletter.” For other recent newsletters, see the links below: The Assembly and Association Briefing, Vol. 2, No. 1 (Issue 10) (January 2015) The Assembly and Association Briefing,... Continue reading → 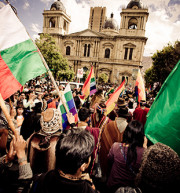 NAIROBI/SUCRE, Bolivia - Special Rapporteur Maina Kiai has filed an amicus curiae brief in the Constitutional Court of Bolivia, arguing that a national law and an executive decree regulating the operations of non-governmental organizations breach the international right to freedom of association. The brief, which was submitted on May 13, 2015, was the first official court filing in the UN expert’s project to advance the rights to freedom of peaceful assembly and of association through the use of litigation in national and regional courts. The project began in Oct. 2014 and aims to encourage the application of international law norms at the domestic level. In March 2013, Bolivia adopted the controversial law on legal personality, despite many analyses indicating that it contravened international law. In June 2013, the equally contentious implementing Supreme Decree followed. Late last year, the “Defensor del Pueblo” filed a petition with the Constitutional Court of Bolivia (Tribunal Constitucional Plurinacional de Bolivia), to challenge two specific provisions it deems unconstitutional. In the analysis of the Special Rapporteur these provisions indeed “unjustifiably restrict the right to freedom of association under international law, standards and principles”. The first challenged... Continue reading →