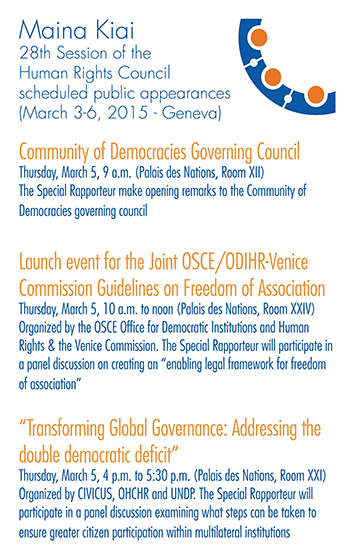 GENEVA – United Nations Special Rapporteur Maina Kiai will be in Geneva this week to participate in several events on the margins of the 28th Session of the UN Human Rights Council, including the launch of landmark joint guidelines on the right to freedom of association.

The guidelines – which were developed by the Organization for Security and Co-operation in Europe’s Office for Democratic Institutions and Human Rights (OSCE-ODIHR) and the Venice Commission – are the first of their kind in the field on association rights. They were adopted and released last December, and are being officially launched on March 5.

The guidelines are currently available via the OSCE-ODIHR website via this link: http://www.osce.org/odihr/132371

The guidelines offer advice and expertise on how to legislate on freedom of association-related matters in a manner consistent with international human rights standards and OSCE commitments. They also reflect evolving good state practices, and are intended to enhance awareness of the right to freedom of association in general.

The Special Rapporteur and his team participated in the development of the guidelines, most notably at a consultation in Warsaw, Poland, last year that brought together experts from around the world.

“International treaties merely set out broad frameworks to protect our rights – and by their nature they don’t get into the everyday nuts and bolts of exactly what the rights look like on the ground,” said Kiai, who is the Special Rapporteur on the rights to freedom of peaceful assembly and of association. “That’s why these guidelines are so critical. They fill in the gaps, and help flesh out exactly what the right to freedom of association entails.”

The OSCE-ODIHR launch event will take place on March 5 at 10 a.m. in Palais des Nations, Room XXIV. Admission is open to anyone with a valid credential to enter UN grounds. Kiai will sit on a panel discussing how to create an “enabling legal framework” for freedom of association.

OSCE-ODIHR released similar guidelines on the right to freedom of peaceful assembly in 2010. At the time, Kiai called them “the most advanced set of good practices available,” and cited them extensively in his 2012 report on best practices in assembly and association rights. The assembly guidelines are available via ODIHR’s website at the following link: http://www.osce.org/odihr/73405

While in Geneva, the Special Rapporteur will also speak at a side-event focusing on multilateral institutions and the rights to freedom of peaceful assembly and of association. The event, organized by CIVICUS, OHCHR and UNDP, will touch upon the topic of Kiai’s last report to the UN General Assembly in October 2014. It will be held on Thursday, March 5 at 4 p.m. in Palais des Nations Room XXI. It is also open to all those with access to UN grounds.

The Special Rapporteur will also speak at a session of the Community of Democracies Governing Council on March 5.