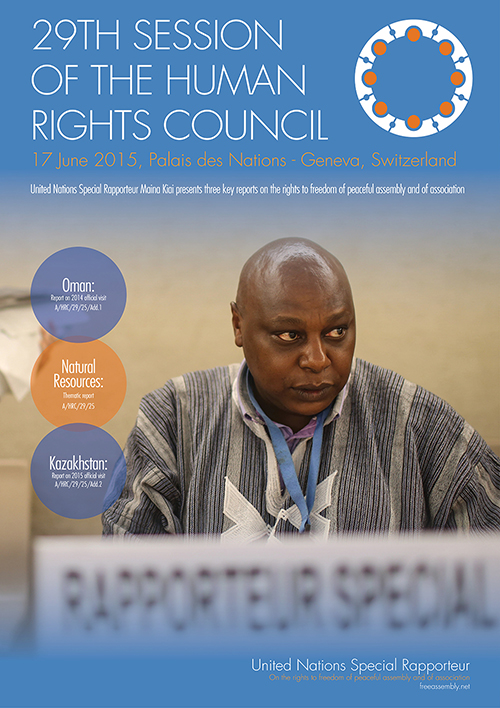 GENEVA – United Nations Special Rapporteur Maina Kiai will be in Geneva this week to present his latest reports to the UN Human Rights Council and to participate in other events.

Kiai, will present two reports covering his country visits to Oman and Kazakhstan and a third focusing on assembly and association rights of the context of natural resource exploitation. A fourth report contains his observations on the mandate’s official communications with UN Member States and replies between March 1, 2014, and February 28, 2015.

Kiai, who is the UN Special Rapporteur on the rights to freedom of peaceful assembly and of association, is scheduled to present to the 29th Session of the Council at the Palais des Nations, Room XX, during the June 17 session starting at 11:30 a.m. His presentation may run into June 18, depending on the length of other agenda items. The session will be broadcast live on http://webtv.un.org/.

The Special Rapporteur concludes that space to exercise assembly and association rights is often more limited in relation to natural resource exploitation because of the significant financial stakes involved – and the potential for corruption. Public engagement is thus essential, he says, throughout the decision chain, from the initial exploration stages through exploitation activities and investment of revenue decisions. Assembly and association rights are key platforms for this engagement.

“The significance of civil society as a stakeholder in the context of natural resource exploitation is underestimated, misperceived and often resisted by both States and businesses,” Kiai writes in the report. “This is symptomatic of a growing disregard for a plurality of views – particularly those which champion non-economic values over economic ones.”

The report calls upon UN Member States to enact an international legally binding instrument on human rights standards for businesses to apply to both domestically and internationally.

The report (A/HRC/29/25) is available via this link: http://freeassembly.net/rapporteurreports/natural-resources/

A factsheet summarizing the report is available here: http://freeassembly.net/factsheets/natural-resources/

Country Report: Oman
Maina Kiai will also present a report on his September 8-13, 2014, official visit to the Sultanate of Oman. The report assesses the current state of the rights to freedom of peaceful assembly and of association in the country, and identifies the challenges to fulfilling these rights.

In the report, the Special Rapporteur highlights serious deficiencies in the promotion and protection of these rights in Oman, including bans on unauthorized protests and on unregistered associations. Political parties are also banned, and the Government exercises “vast control over the civil society sector.”

Kiai notes, however, the tremendous strides Oman has made in transforming and modernizing its society over the past 40 years, and argues that these advances signal the country’s abundant capacity to make similar improvements in the human rights realm. He says that an increased focus on human rights is not simply a matter of meeting treaty obligations; it is also the best way to secure the country’s future peace and stability in a volatile region.

“Silencing voices of dissent is not a viable approach going forward,” Kiai writes in the report. “When a Government fails to provide an outlet for popular sentiment, it loses a valuable opportunity to feel the pulse of the nation, and effectively creates a sealed vessel under pressure that will eventually explode with dire consequences.”

The Oman report (A/HRC/29/25/Add.1) is available at this link (along with the Government’s response to the report): http://freeassembly.net/rapporteurreports/oman/

A factsheet summarizing the report is available here: http://freeassembly.net/factsheets/oman/

Like Oman, Kazakhstan has experienced impressive economic growth and development in recent decades, which has made it “an important player in the region and globally,” Kiai writes. But challenges remain, including serious obstacles to the full respect of the rights to freedom of peaceful assembly and of association.

For example, peaceful assemblies are not allowed without prior government authorization, and approved demonstrations are pushed to the fringes of town in designated protest areas. Associations are considered illegal if they are not registered, while political parties and religious associations both face serious obstacles when it comes to formation and operation.

Kiai notes in the report that Government representatives repeatedly stressed that stability and cohesion are particular aspects of the Kazakh society that needed to be preserved – in part by restrictions on assembly and association rights. But Kiai argues that stability is often misused to curtail the enjoyment of these fundamental rights.

“The protection of human rights and the maintenance of peace and harmony are two sides of the same coin … mutually reinforcing and interdependent,” Kiai writes. “The free exercise of the rights to peaceful assembly and of association provides authorities with unique insights into the challenges that people are facing. … There is no better way to understand the needs of people and no better check and balance for authorities.”

The Kazakhstan report (A/HRC/29/25/Add.2) is available at this link (along with the Government’s response to the report): http://freeassembly.net/rapporteurreports/kazakhstan/

A factsheet summarizing the report is available here: http://freeassembly.net/factsheets/kazakhstan

Communications report
The Special Rapporteur will also present a report covering his observations on communications with Member States and replies received. This report contains all communications to national governments concerning allegations of human rights abuses.

The communications report is available at this link: http://freeassembly.net/rapporteurreports/communications-2014-15/

Side-Events at the 29th Session of the Human Rights Council
While in Geneva, Maina Kiai will also participate in a number of side-events, including: