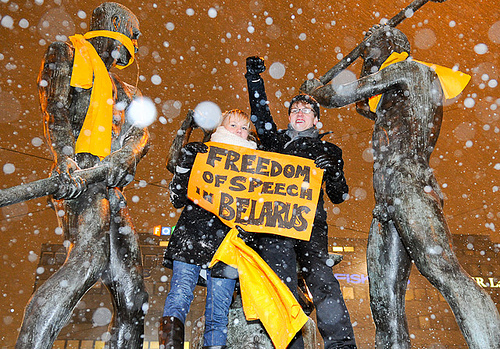 Three United Nations independent experts warned that the new legislative amendments recently adopted by the National Assembly of Belarus may severely and arbitrarily restrict the rights to freedom of peaceful assembly, association and expression, and breach international law.

“These amendments could constitute a direct affront to the exercise of fundamental civil and political rights which are at the core of any democratic society, such as the rights to assembly and to associate freely,” said the Special Rapporteur on the rights to freedom of peaceful assembly and of association, Mr. Maina Kiai.

Mr. Kiai recalled that the National Assembly of Belarus introduced changes to the Laws on Public Associations, Political Parties, Public Gatherings and Administrative Violations, as well as the Criminal and the Election Codes, “in a legislative process that lacked proper consultation with civil society.”

According to the new legislation, organizing assemblies without the prior and explicit consent of the incumbent authorities is now considered a criminal offense, and new reporting liabilities are imposed on organisers concerning the financial resources used for such assemblies. Disseminating information, including through the social media, without any permission for assembly is also strictly prohibited, as well as any public call for initiating assemblies.

Moreover, there is a possibility for criminal liability when receiving any foreign grants or donations, and there is a ban on NGOs to store funds in banks on the territory of foreign States.

“Criminal sanctions for the ‘staging of seminars’ or distributing ‘propaganda materials’ is incompatible with the international obligation of the Government of Belarus to fully guarantee freedom of expression,” said the Special Rapporteur on the right to freedom of opinion and expression, Mr. Frank La Rue. “I am seriously concerned about these measures that will undermine the ability of all individuals to disseminate information and to express their legitimate grievances and concerns peacefully.”

In this connection, the three UN Rapporteurs expressed fears about the possible linkage between the aforementioned amendments to various laws and the situation of Mr. Ales Bialiatski, the President of Human Rights Centre ‘Viasna’ and the current legal proceedings against him for alleged tax evasion.

“For human rights defenders and activists to carry out their legitimate activities, they should be able to work without any undue obstacles, including funding restrictions,” said the UN expert of the situation of human rights defenders, Ms. Margaret Sekaggya. “When defenders are allowed to associate but cannot effectively seek, receive or utilize funding resources, the right to freedom of association becomes void.”

Moreover, the new amendments introduce provisions on State treason that prohibit contact with foreign States, foreign organizations or their representatives in the conduct of activities that could be considered as ‘damaging to national security’. “These new provisions could unduly hinder and criminalize legitimate engagement between human rights defenders, including activists and civil society organizations, and international bodies or organizations, including the United Nations,” the three experts stressed.

“These restrictions can worsen the current climate of fear and intimidation,” they said. “The use of broad definitions on the legislation can fuel renewed persecution of human rights defenders, activists and NGOs, severely contracting the space in which they operate.”

In their view, “such actions could be part of a wider effort to obstruct and criminalize the legitimate activities of human rights defenders and associations working in the defence and promotion of human rights and fundamental freedoms, including those who may be critical of actions and policies of the Government.”