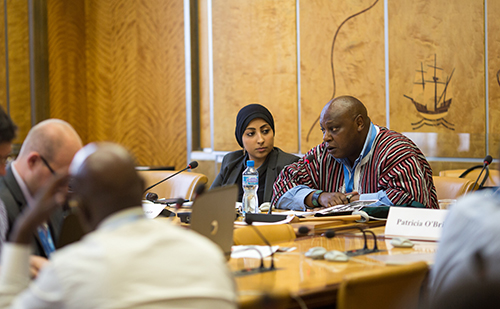 GENEVA – A group of United Nations independent human rights experts has urged the government of Bahrain to release prominent human rights defender Maryam Al-Khawaja, who has been detained since 30 August on charges of assaulting a police officer.

Ms. Al-Khawaja was detained at Bahrain International Airport while travelling to visit her father in prison. She is currently being held at Isa Town women’s prison on charges of assaulting a police officer pending investigation by the Public Prosecution. Reports say her Danish passport has been confiscated and that she has been denied access to a lawyer.

“The detention and decision to bring charges against Ms. Al-Khawaja is deeply concerning. In absence of credible evidence, the Government of Bahrain should take immediate steps to release her,” the experts said.

“Detention of civil society members who seek to contribute to the promotion and protection of human rights is unacceptable,” they noted. “Defenders play a key role in holding States to account for the implementation of their human rights obligations, including at the international level. Their legitimate work should be fully respected.”

The experts expressed their concern at the apparent continued harassment and imprisonment of individuals exercising their legitimate rights to freedom of opinion and expression in Bahrain. “The detention of Ms. Al-Khawaja is another patent measure of retaliation against individuals who advocate for human rights in the country,” the experts said.

“We call upon the Government of Bahrain to immediately implement the recommendations of the Bahrain Independent Commission of Inquiry and the recommendations put forward during the country’s Universal Periodic Review to ensure that human rights defenders are protected and able to carry out their peaceful and legitimate work free of intimidation or persecution,” the experts urged.

Recalling the two last-minute postponements of a visit to Bahrain by the Special Rapporteur on torture and other cruel, inhuman or degrading treatment or punishment in 2012 and 2013, which were considered as an effective cancellation, the experts called upon the Government to commit to and cooperate with all planned visits to the country. They also urged the Government to respond favourably to pending country visit requests by other Special Rapporteurs.