Discussion: Focusing on the final two years of the mandate – where has it been and where should it go? 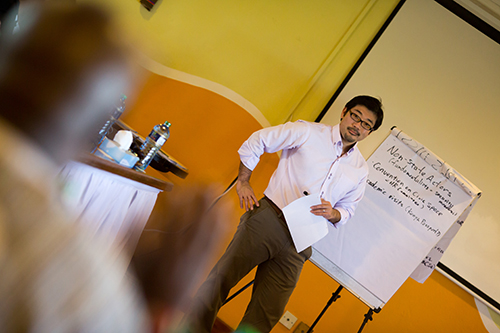 Maina Kiai is nearing the completion of his fourth year as the inaugural UN Special Rapporteur on the rights to freedom of peaceful assembly and of association – leaving him with two years before he departs the mandate.

Over the last three-plus years, Kiai has strived to actively protect and promote the rights to freedom of peaceful assembly and of association, through his reports, through official and unofficial country visits, and by meeting and consulting with as many stakeholders as possible.

It has been an exciting and productive four years, but there remains much work to be done.

Despite increased international awareness of the issues, for example, many governments are growing increasingly restrictive when it comes to regulating their citizens’ abilities to enjoy the right to freedom of peaceful assembly and of association.

As he prepares to enter the final two years of his mandate, the Special Rapporteur would like to hear from you – both in evaluating past work, and in shaping work for the future.

Tell us what you think

We’d like to hear your views. What has the mandate done well? Where has it come up short? What types of reports would you like to see? What should be the mandate’s strategic focus for the final two years, and how should the Special Rapporteur addressing these areas?

Keep in mind the more formal tools available to the Special Rapporteur – direct communications with countries, press statements, thematic reports, and official country visits. But also consider less conventional means, such as the mandate’s new litigation project, the possibility of drafting guidelines on assembly and association rights, the use of non-official country visits, and more.

Also note that the Special Rapporteur has a total of five more thematic reports to present: three more to the Human Rights Council, and two more to the General Assembly (though the focus areas for two of these reports has already been finalized). He will also be able to make a handful of official country visits, numerous non-official trips.

To assist in your evaluation, we have prepared a short summary of the mandate’s key work from May 2011 to January 2015.

If you are comfortable making a public comment, you may do so using the form below (log-in is via Facebook, Yahoo or Hotmail). If you prefer to make a non-public comment, or to submit answers to the questionnaire, you can e-mail us at info@freeassembly.net.

Video: Enhancing assembly and association rights through strategic litigation
December 3, 2014
View the quotes in your language: